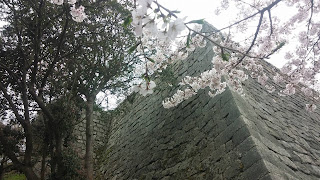 Now is the time of the Sakura here in Japan. The weather is getting warmer, and on Shikoku the Cherry Blossoms have bloomed. They won't last long from what I'm told, and already they seem to be growing thinner. Last weekend I went with Masamichi and his friends early Saturday to do as Japanese people do during this time; drink and eat outdoors under the pink blossoms. We headed to Marugame Castle to do so. It was perfect weather for it. Warm enough that it was no pain to be outside, yet not so hot that I was sweating under the various layers of clothes I need to cover my tattoos.
Marugame Castle was pretty crowded but not obnoxiously so. In fact it was nice to see so many people out in the open air interacting with each other. Nice to remember that Winter comes to an end, and see people just enjoying one another's company and the fine weather. Kids were cooing  and running free through the grass. Food stalls lined the street cutting up from the entrance and down into the nearby public park. The air smelled sweet with the mix of flowers and salted, grilled meats. Everywhere there were tarps of people and picnics, and talk that I could only understand a spare word or two of. 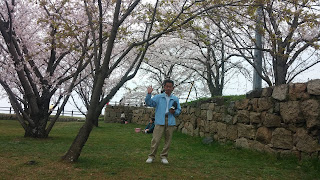 While we were there they taught me a few Japanese drinking games, and I taught them a scaled back version of Kings.After we had had our fill of drinking and food, we headed up to the summit of the mountain. From there the view was outrageously gorgeous. Below us was the thickest batch of Sakura trees, the tips of their branches just reaching the floor of the highest fewing spot, so that it looked like you were looking down into clouds made of cotton candy from above.

After we headed to Majong, which I managed to win a handful of times thanks to the advice of Masamichi. I almost think I understand the game. Almost. I learned the Kanji for "naka" lately, and as they were laying tiles down I pointed to a tile that looked to be marked "naka" and said it was so. Apparently it is not, because this seemed to amuse them all to the point where they kept saying naka whenever it came up. Though they were pretty impressed during a section of Kings where the rule was no one could speak their mother tongue, at how far my Japanese has come along. 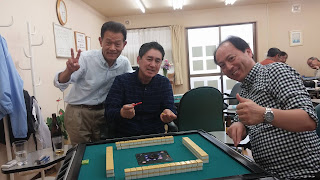 Pictured above; my crew of O.G.sans
As always, I hope things at home are going well. And also ha, I heard it snowed. Suck it losers. I haven't seen snow in a year.

Posted by cjohnson at 6:48 AM No comments: