This week was my first full week teaching alone (mostly). I had one private session I had to observe, and then the rest was all me. So far, I think it's going well. I like teaching kids, it turns out. They're pretty funny and they warm up quickly. Discipline is something I may have to work on but so far there hasn't been a huge need for it.

For the next week or so I mostly teach in Marugame, and once in Utazu, a neighboring city. It's not hard to walk or bike to either locations, but soon semester will change and I'll be getting a new schedule. Wednesday I taught at Utazu. Since it was raining I decided to walk. Getting there was easy until the end when my phone started to die and google maps went a little wonky. Luckily I had padded the time a bit and arrived way early.

It's kind of funny teaching adult students here because they'll compliment you in a way that they don't tend to do in the States. A few times now I've had adult students tell me I'm "a cute girl" or heard them tell the office staff I'm sugoi (cool).  One lady at Utazu kept kind of chuckling whenever I got up to write on the white board and telling me I was cute. Japan may very well end up swelling my head.

On the way home from Utazu I ran into some issues. With a dead phone I set off down the street, semi-confident that I knew the way. Not too long after that, I overshot the known way and ended up much further down than I intended to be. Luckily, I at least have the kanji down for my own city: 丸亀. (Or circle turtle, as it were.)

After locating that on a street sign I kind of just followed them. I came out on the other side of the city, closer to Gold Tower in Utazu then Marugame station/castle where I live. Luckily I could spot Marugame Castle from the road and just changed course and headed that way. All ended well, and I got to spend a few extra minutes traversing Marugame back roads, singing showtunes to myself. We call that a kinda mostly win-win. 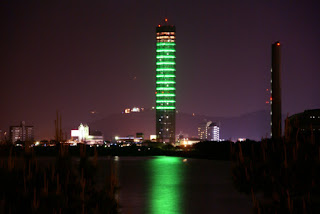 Gold Tower changes color depending on the weather. Green for a clear day.
Blue for rain. (Photo from hoosan.moo.jp)

Thursday I spent most of the day writing, and studying both Japanese, and for the GRE (I won't be taking the test for awhile, but I'm trying to make a habit out of it.) I found a good site for basic grammar online, and I'm pretty comfortable at this point with Hiragana. Going to be starting Katakana soon. So far, to my immense pride, I can say things such as: Are wa Amerika no kumaru desu. (That is an American Car!) And the oh so important: Kore wa hoteru janai desu (This is not a hotel) which I will be sure to tell everyone who enters my home every single time because I can say it. And of course: Watashi wa sensei desu.

And back to the subject of being a teacher--Thursday is also the day I had my first lesson with Masamichi, who is apparently the pot of gold at the end of the Gem School rainbow. Having him as a student is something to be envied from what I've come to understand. He is a retired office worker who speaks English very well, and his lessons are basically just for his enjoyment and not a necessity. He likes to teach his foreign teachers all about Japanese life and culture, and seems like one of the nicest, coolest guys you'll ever meet.

Our first lesson he asked me how much Japanese I knew, and after I told him, we spent the time talking about the difference between hiragana, katakana and kanji. He showed me his name in roumaji and in hiragana and kanji, and told me all about its meaning. (Pine tree on the seashore is his family name and right way is his given name. Matsuura Masamichi. Or: 松 浦  正道.  He also told me that my name sounds like "ice" in Japanese since my name in when pronounced by a Japanese speaker sounds like Kouli--and ice is Kooli.) I most definitely learned more than him that session, but he seems to like teaching me about Japan, so as long as he's enjoying his time, no arguments here. The only thing I may have taught him is the word "pun" because he told me a joke.
What is a type of green vegetable that sings?
Elvis Parsley.
He's a really funny guy. Told me he would be like my "Japanese father", and if you know me you know my favorite thing in the whole world is being mentored. So yes! Fantastic.
As far as doing things goes, I mostly stayed home this week. I did check out Ritsurin Gardens with a native Japanese person, and that was pretty interesting. Sadly my phone was mostly dead at the time, so I didn't get any pictures. Please accept this photo of a Japanese 7/11 and me drinking a Japanese energy drink as a substitute. 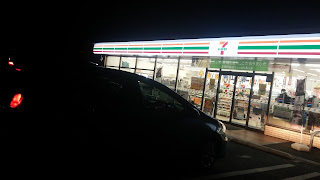 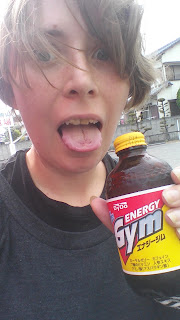 to work with kids you gotta be genki

I intend to visit the garden again soon. It was full of Japanese pine, and flowers big as my fist that hadn't bloomed yet. Really nice stuff. The local I was with told me a bit about everything, and then I got to tell him about tattoos. He noticed mine and asked me to show him, and he was kinda in the same awe I was in the garden, which was funny to me considering tattoos seem pretty commonplace to an American.
Sunday I went for sushi with my coworker at a local joint, and that was pretty radical. It was served on a conveyor belt, and you could grab whatever you wanted or order it special on a screen. When it comes close your screen will beep and show you a picture of your order. Its kinda adorable. 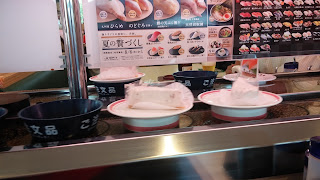 they had some bomb cheesecake.
Then after work tonight I went out with my friend Kenji to a bar or two. We checked out a jazz bar and a sports/dance bar. They were both kind of dead because tomorrow night Marugame is having a festival. The sports/dance bar was styled in a way that almost nearly reminded me of bars in Youngstown. Ed Shreen was playing, while the three other people in the bar we trying to make a hip-hop remix of something, and tennis was muted on the television. In the end we took advantage of the Japanese liberty to drink on the streets and bought a good old fashioned bottle of Carlo Russio, and headed to Marugme Castle. It was pretty strange walking around a park near a historical monument with wine at night. Especially dirt cheap wine like C.R.  In America, that wouldn't really fly. But we sat outside and sipped wine, and even when the cops drove by there was no issue. Here, I guess, there's the assumption that you can trust people.

As far as lit goes, I've been slowly crawling through the last of Sherman Alexie's  The Lone Ranger and Tonto Fist Fight in Heaven, cause its the second to last unread book I have with me. The last being a manuscript from Gitta Albares. After that it's all rereads.
So far I have three publications coming up in various anthologies. Weird City will be publishing my modern urban retelling of "The Twelve Dancing Princesses," titled "Dancing Girls",  For Books' Sake will be putting out a fairy tale themed YA anthology with my retelling of "The Man with No Heart" re-titled "Animal Heart", and Zimbell Publishing House will be producing a horror anthology called Tales from the Grave, featuring "Dream Girls" inspired by a fairy tale based in Native American folklore where a man carves a doll in likeness of his wife after she passes. I left the specific collection it was in at home, and if you know anything about fairy tales you know that googling "Dead wife" along with "Fairy Tale" pulls up pretty much every single story in existence.  (I almost want to say it was actually called "The Dead Wife" or "The Doll Wife".)
On top of that I received word today that Dancing Girl Press will be releasing a chapbook of my poetry tilted Revisionist History in the early Spring.
Overall, it's been a pretty good month both professionally and personally. Most def, top 10. Probs even 5. Maybe even 3. Okay, yeah, probably top 3. Can't think of many better. Kampai!