These are a Few of My Favorite Things

Been kinda busy and hella fatigued this last week. Caught and got over my first cold in Japan and then also my first hangover in Japan. Fun times. Haven't done much when it comes to sight seeing but I did go to a coworkers birthday party which was a good time and the root of the aforementioned hangover.
So as for this post, I figured I would just give you all a general sense of the things I dig about Japan thus far with a comprehensive list titled:

The Things I Dig About Japan Thus Far: 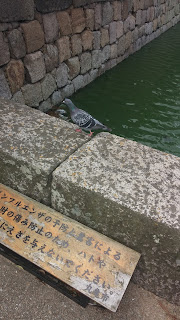 This bird does not give one fuck.

There's a lot of wildlife here, and it seems more or less unperturbed by people doing whatever the hell it is people do.  I'll come up on a flock of pigeons just chilling in the middle of a path and they'll hardly spare me a glance or move out of the way. The only time I've seen them scatter is when little kids straight up run at them at full speed screaming like they're about to cross into Mordor. On top of that the ravens here are fucking huge. Its easy to see how Japan could come up with a game where birds might one be the dominate species, and also may be the size of people (that was always unclear to me.) 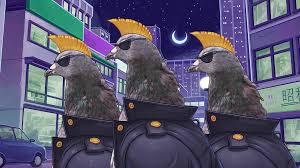 Rivers and the Things That Live in Them. 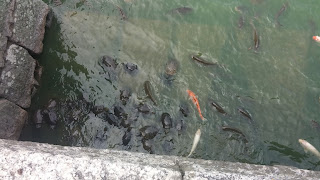 There is a river or some body of water pretty much everywhere you look. And there's a shit ton of stuff in them. Oh, yeah, and like the water is clear enough that you can see those things. Having lived next to a park with its own fair share of lakes and rivers, its nice to have something like that around here to kinda make it feel homey. Although they're kind of a different breed. For Youngstown folk, I guess the easiest way to explain it would be the Lilly Pond x 10. I mean, you may spot like four or five turtles as the Lily Pond chilling on a rock or some shit, but check that out. That picture right there is like at least twenty turtles. That's at least five times as many turtles. That's what I call getting a bang for your buck. And people just fish like everywhere. I was riding near a pretty buisnessy section of town over a bridge and there was just this dude standing there fishing. Pole in the water, bucket of fishy ice at his feet. At night I'll see people along Old China River just throwing their poles in. Fishing, from what I can tell, is a major hobby here. And who can blame them? They're everywhere.
(The whole fishing where you find water and catching something in Pokemon makes much more sense now. So does riding your bike from town to town. That is literally something you can do. Which brings me to my next thing.)

Is so easy. Like, it just makes me kinda mad that America hasn't worked out a better transportation system. And also that there's no ferries cuz we don't need em, we don't got that much water--but still. I haven't taken a ferry yet, but the fact that I can is pretty radical. America, why don't you flood a little so I can come home and travel by ferry? I expect to find you Venice'd up upon my return. Get to work.  Plus there are the

I love taking the trains. Like dig it so much. So far I haven't had any grievous mishaps. They seem simple enough to work out. (I'll probably kick myself for saying that when I end up on the other side of the island.) A lot of them look crazy awesome too. 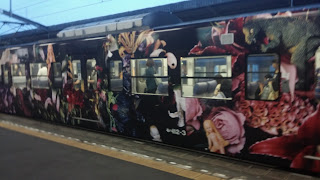 Wut is this? A bunch of dinos, dolls, flowers and fish? Nah, its more than that. That's what we call art, son.
Also it'll take my ass home.
Let's see you do that, American art. 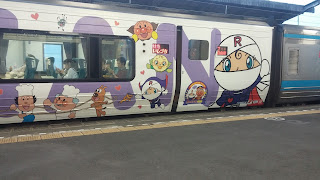 That one right above is an Ampanman train. One of the first things I kinda learned about when I got here. Kids love him. He feeds people his head which is made out of bread, apparently. So an easy way to make students laugh is to pretend to eat them. (Or they could just find the idea of cannibalism delightful all on its own. Hard to say.)
Anpanman pilot.
The view from the train is usually pretty spectacular. There's one stretch in particular where its so close to the sea, it looks almost like you're coasting over water, and there's this small shrine out on an island with a bridge leading to it which is pretty much the most beautiful thing ever. 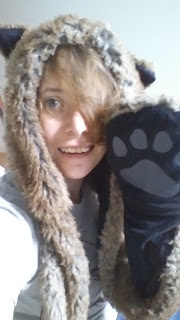 No photo available so please accept this picture of me in a wolf hat which
is also pretty much the most beautiful thing ever.

Trains also are like the perfect place to scribble a poem or two. Actually Japan in general gives me a shit ton of

Time to Write! (That's what we call a motherfucking SMOOTH TRANSITION!)

I've gotten like 20 poems done since getting here, two and 1/4 short stories, and put in some great organizational work and writing on the YA novel I'm trying to bust out. Plus I've got about 30 submissions (a lot of them simultaneous) sitting on the market as I type this. (It feels like it's taking forever to hear back cause of this, and everything that I am getting published is like so far in the future its making me impatient to the point of skin itchery.) I found time to write in America, yeah, and was cranking stuff out even when I was working as a telemarketer and my time was mostly ate up by the hours spent haranguing old folk for their money, but here I have time to write, work, study and also do other things. It's crazy what can be done when cold blooded capitalism doesn't stand in the way, and you don't have to work crazy hours to make a livable wage! To bad America can't be like that. 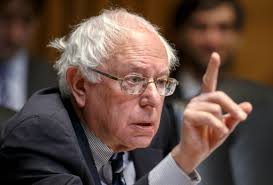 But nah, seriously. Getting some good scribbles and studying done. Now insert clever transition to:

Which are everywhere. On my way to 7/11, there's a shrine. Going to work? Probs going to see a shrine. There's very little coding to where stuff is placed here, which means the historical and spiritual is bumping shoulders with the modern and commercial, and that makes for a really interesting blend of sights when your just walking around. 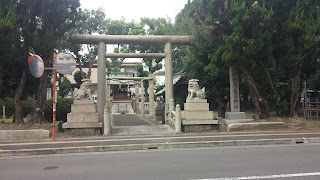 I like to think those are pugs. I know I'm wrong but
I don't wanna be right.

Shikoku is actually a pretty rad place to be in if you wanna go temple hopping and such. It's home of the 88 Temple Pilgrimage associated with the Buddhist monk Kukai. A lot of people come here to complete (traditionally) the 750 mile walk along Shikoku to visit each Temple. (Now people also use bikes, trains, cabs, ect, cause we're lazy and they're there.) On top of that there's a good 200 temples on the island not related to the walk, and also a ton of smaller shrines.
I think I'm done transitioning now so lets just move onto 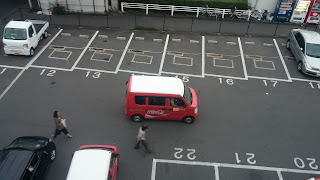 What is this? Look at it. It's so cute. It's like, not big enough to be a truck transporting good right? But here it is. Doing what? What is your purpose? Why are you here? I haven't seen any other brands driving cars like this around. Why do you make me so thirsty? You're an enigma. A beautiful corporate enigma. An that's pretty much all I have to say about that.

And
last but not least
In fact, pretty much all of these have been at random, but
this next one is probably my favorite among favorites--
My local tobacco stand dude. Or more specifically him and his wife.
They are just too cute. Like today he was watching TV and I was too shy to knock on the window. His wife was nearby drinking tea and noticed me and her reaction was adorable. She rushed over and tapped him on the shoulder and waved at me really hard. Then she picked out a lighter that she thrust into his palm to give me, as she always does when she is in the area of the window. She is like the sweetest lady ever. And they also feed my addiction so there's that.