Today was the Marugame International Half Marathon. There were a ton of runners from all over who ran from my city Marugame to Sakaide and back. I went to see it with my Japanese Dad, Masamichi, and his friends. We put meant in the parking garage of a nearby mall and put together a bunch of flags. We were rooting for runners from Masamichi's friend's old college, Senshuu University. That's up in Tokyo. Senshuu also means last week, and I was a little confused by this. When I brought it up everyone thought I was making a joke, so I rolled with it.

There were tons of runners both professional and non. My friend Laura ran it, but I think we left before she made it to our point. We were right next to the half way point where folks turned around. 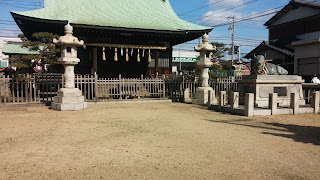 Shrine behind the marathon route. 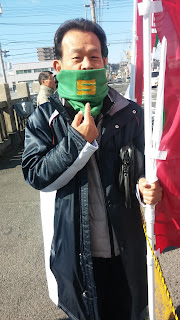 Masamichi decked out with Senshuu gear. 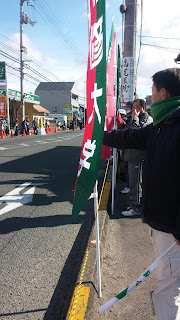 Afterward we went to an Okanmiyaki restaurant, which is where you cook your own food on a grill. Me and Masamichi got a dish that was basically like a pancake of a bunch of stuff--seafood, egg, lettuce and meat. He let me try to flip it, which was a disaster. You can see my failure at the end of this montage of me and Masamichi kicking it:
Then the group split up for a little bit and Masamichi showed me this super popular view from the top of a nearby mountain. Like that famous place in Europe I know pretty much nothing about other than it exists, lovers put locks on the wire fence in celebration of their bumping uglies. 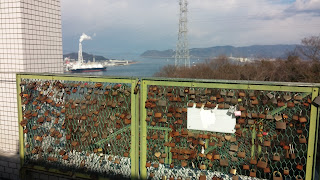 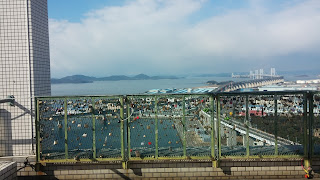 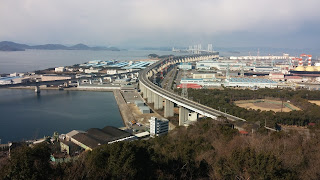 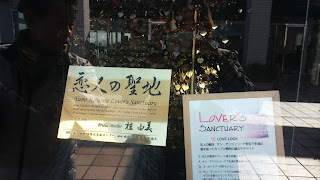 What is a Bridal Mother? 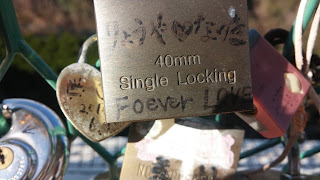 You tried so hard to English.
(says the girl who misspells everything she writes in Japanese
and 1/3rd of the shit she types online)
Afterward we all gathered back together at a little cafe where I played Majong for the first time. We played two rounds of games, and with the help of Masamichi I came out on top the first time and SO CLOSE to number 1 the second time. Don't ask me how though. I understood maybe a 3rd of what I was doing. 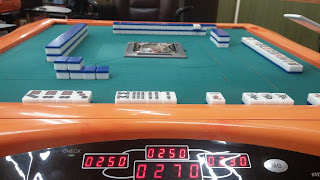 This is an automated majong table. Somehow it spit out the same color tiles each time. No fucking clue how.

Masamichi is a pretty rad dude. I'm really lucky that he's taken me under his wing. I learn and see a lot thanks to him. Like about Koukai, who brought zen Buddhism to Japan and built the 88 temples on Shikoku. So far Masamich and I have visited 74-78. He's also taken me to the Marugame Fan Museum. Marugame is famous for its paper fans, and you can watch people build them by hand there. It looks mega mega hard. Also we've gone to the Seto Ohashi museum, which was hella rad.

I'm working on re-stabilizing myself after the death of both Matt and Steve Watkins. Part of that involves sticking to a schedule for awhile. So hopefully if I stick to it, I'll be updating this more.

Hope you all are doing well.
-Couri
Posted by cjohnson at 3:52 AM