Let's Make Mochi and Have a Prom

Thursday was a national holiday celebrating the founding of Japan, so I had off work. Masamichi invited me to his neighborhood association's get together, where a bunch of people showed up to make mochi. 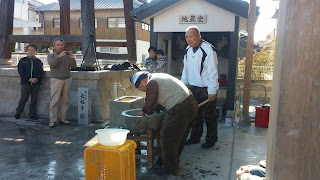 Mochi is made from a special rice that they soak in water for a night before steaming for about half an hour. Afterward they put it in a mortar and beat it with hammers. Then they roll it into a cake with sweet bean paste inside (I also saw them make a few with chocolate for kids.) It was super cool to watch, and they even let me try my hand at the hammer and the rolling. You can watch the process here:

Everyone was super friendly, and there was even a youngster there who spoke a little English. We talked about Pokemon, which is the usual bridge between me and the young, be they Japanese or not.
After we made all the mochi and ate most of it we got to see an ancient Buddhist statue. The neighborhood association's club house used to be a shrine, so they had a lot of old Buddhist paraphernalia.

Saturday the Mitoyo International Exchange Society threw a Valentines Day Prom. Japan doesn't do the prom thing so much, so it was cool to give them an idea of what its like. To make things even sweeter than the sweaty awkward dances of our youths, there was actually a fellow there who was super sweet at ballroom dance, and he showed us how to do the Jitterbug. After we mixed a bit and I got to know some pretty cool folk. 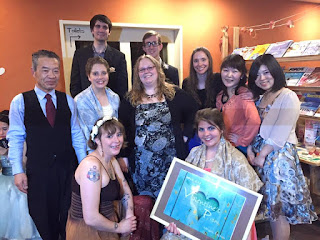 Here's a couple of us towards the end posing it up. I like to think I dress better now, but I have about as much poise as I did at 18. More tattoos though, so there's that.

On our way back to the train station while we were coming around the mountain corner, a tanuki scurried out into the middle of the road and back again. He was absolutely beautiful. It was the first time I got to see one. I'm hoping next time I get an even better eye full.

I hope you all are having your own wonderful Valentines Day back home. Catch ya'll soon.

(Just wanna point out I totally held myself to my word and followed my blogging schedule this week. And almost did all the studying and other things I had on my plate. BOOM! High five, me. You are the best. Let's see if we can do it again this week.)