Let's Go To the Mall!

Saturday Marugame festival kicked in to gear but I was feeling pretty lazy. I dropped in for a little bit. There were two areas, one near the station and one near the castle, where food tents were set up and dances were going on. There were several different tropes dancing one after the other. Some were traditional, while some were done to JPop and some were done to American hip hop. It was rather surreal seeing a traditional Japanese Dance followed up by (sometimes kids) dancing to gangster rap.

It was a two day affair, the first night featuring fireworks that I watched from the porch of my apartment. The second night I climbed up the castle's mountain and watched it churn on below me.
I stayed up there watching the sunset Sunday night, and it was really beautiful. Marugame is kind of squished in together with Sakiade and Utazu, so its hard from that height to tell where one city ends and the other begins, but the three of them together seem huge. Things seem to be placed much closer together here than at home, so its easy to ride my bike through one city into the next without realizing it. 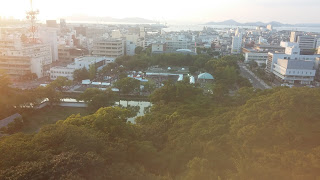 marugame seen at dusk from the castle 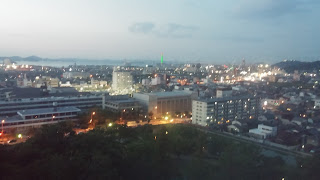 marugame as the sun finally sets

During the day Sunday I found my way to the local mall, which is about 20-25 minutes away from my apartment by bike. It's a pretty easy ride. The mall is called "Youme" (which I believe is a chain?) and about three stories in height. I bought some more sleeves to cover up my tattoos, and some weird english shirts. The food court was on the top floor, featuring a McDonalds complete with a Ronald Mc Donald Statue.  It's also right next to an arcade, so I'll probs be back to explore that soon. 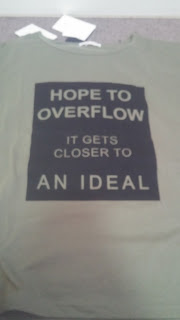 i do not regret this purchase at all. 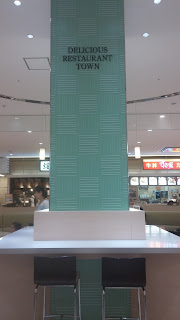 property value low, crime rate through the roof. schools? so so. 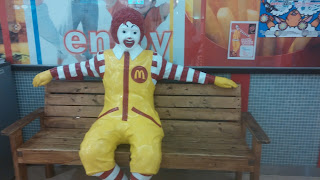 can't decide if he's less or more creepy than his American brother. 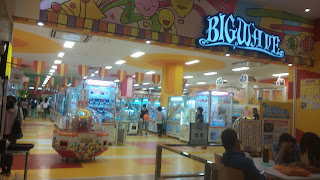 scooooooooore.
So far things haven't been too bad. I even talked to a salesperson at a snow cone stand at the festival and they more or less understood me, and I more or less understood them. (Ichigo is Japanese for Strawberry. Hella important when it comes to snow cone buyage. In fact, I've been eating a lot of strawberry flavored things in general. Their pretty much my jams here. )
Today, though, I had a fumbling exchange with the cutest clerk at 7/11. I was trying to buy smokes, and we kept going back and forth trying to get to the right pack of Malboros. (Camels aren't native to these parts I guess.) I'd point and say "Sore desu!" and she would move to the wrong one and I would shake my head--ect. We were both laughing, at least, and she was absolutely so sweetly amused. Eventually I managed to tell her one over by saying "ich" and gesturing right.
Learning is fun. So, sometimes, can miscommunication be.