So it's almost been a week now since I came to Japan.

I arrived on Saturday, late at night, and meant Leigh and Sam at the airport in Takamatsu. I'm located in Kagawa which is the smallest prefecture on the smallest of the main islands, Shikoku. Marugame is the city I am based out of, which I'm still in the process of learning about, so will most likely devote time talking about it later. To me it seems pretty big, but apparently it is similar to Youngstown in a lot of ways. It's not considered a city really, from my understanding, but rural, and many of the younger people are leaving for bigger cities. They drove me from Takamatsu to Marugame and showed me Don Quixote which is a chain store, kind of like a Wallmart meets a Dollar General with slot machines in the basement.

My apartment is called LeoPalace, and its just down the road, and near Marugame station. The place is on the small side, comparable to a studio back in America but set up to make it a little more manageable. Through the front door there's a small hall with the kitchen set to the left side. Mini-fridge, cupboard, and a hot plate and sink. Then past that sunk into a tiny off shoot there's a room with the shower and tub and another room with the toilet. The living room is beyond the hall, and up the wall there is a ladder that leads to a cubby area with my bed. If I sit up too quick my head hits the ceiling. I am learning to avoid that. (By the way, I just got done reading Harper Lee's Go Set a Watchmen, where Scout has the same issue with cars. It doesn't feel exactly on par with To Kill a Mockingbird. Like its more of a draft then a finished product? There are some places where the perspective seems to switch in a jarring way, and the pacing seems just a little off. Also I miss Boo Radley. Like there is not one mention of Boo. And I don't think it exactly answers the questions of race that it poses--it kinda starts centering more on Atticus and Scout's relationship, which is okay, but it seemed to end rather quick. I liked it alright, and I think there's a lot of interesting things going on in combination with Mockingbird. Apparently some shady stuff went on anyway with the publication, which could explain some of the issues with the novel. I won't go into it here, but Thug Notes goes over it pretty well here: https://www.youtube.com/watch?v=gWiBTrlVQH4)

The station is nearby, as well as Marugame Castle. Marugame Castle was fist in use in 1587, and was home to Ikoma Chikamasa, a dude I know nothing about currently, other than the fact that he eventually built another castle in Takamatsu and gave Marugame Castle to his son. In 1615, however,there was a decree that each providence could only have one castle, and so Marugame was dismantled. Eventually it was given as a gift to Yamazaki Ieharu for his mad bravery in the Shimabara Rebellion of 1637-8, caused when taxes sky rocketed for the building of a new castle elsewhere, and Roman Catholic Christians were tired of being pushed around. Didn't work out so well for 'em though. The leader of the rebellious Christians was beheaded and a prohibition against the religion was strictly enforced until the 1850s. (Btws I'm stringing most of this together through wikipedia articles.) After he was given Marugame Castle along with some other land, he began to rebuild over the ruins. Eventually it was handed over to the Kyogoku clan, and they continued renovations. However, a lot of the castle was lost again when a fire broke out in 1869, and the Imperial Goverment took apart more in 1870 for reasons that are not mentioned on the wikipedia page. I may look in to that more later.

Now its declared precious property and won't be messed with. Its one of the few castles left with the original wooden tenshu--or central tower/keep. That's where they keep the museum which I have yet to go in. 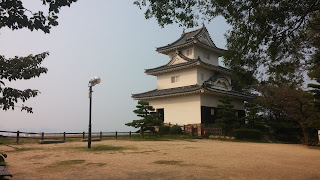 The area the castle is located in is really beautiful. It has a moat surrounding it filled with koi, and some pretty hella big turtles. A few big white geese, and I think I saw a crane. Over a bridge there's a set of heavy wooden doors leading up to a path and another set of heavy wooden doors. Through the archway there’s a paved road that leads in two directions. One up the mountain towards the castle, the other to the right to what looks like a museum, and some forested walkways. There children were catching insects with little bug nets. There were a few levels of the mountain with observation decks. From up there I could see all of Marugame proper. There are several mountains in the area, and back towards where I came from just beyond my own neighborhood I could see the ocean start. Below to the right there was a baseball field where a few men were playing. To the left there was a park, complete with swingsets and walking paths.
I figure it's going to end up one of my favorite places to meander around. I'm playing with the notion of jogging there, but I think I may have to wait for the weather to get cooler. It's super humid here. Hot enough that people have to carry handkerchiefs to wipe the sweat off of their faces. Also I lack the appropriate clothes, and they may be hard for me to get my hands on, since tattoos are a big issue here in Japan, and showing them means you risk offending some people.
So far I haven't had a lot of interactions with many people other than the woman who pulled the sticker off my butt for me in the shopping center, and the fella who approached me when he thought I was lost. A few people have tried to talk to me but all in Japanese. Its funny because when I tell them I don't understand they just keep going friendly as ever so I mostly smile and nod. I'm looking in to lessons soon. I hear there are free ones in Saikade on Sunday.
I've started kind of teaching. Mostly its young kids, and its basically playing with them while using English. (You have to be really "genki" which is healthy/energetic.) Then there are a few older classes that I have meant. (A group of Japanese adult students called me "sugoi" and "kawaii" and one of them suggested I get a Japanese boyfriend. They were hilarious.) I teach at a couple locations but the trains are surprisingly easy to navigate, and its a nice way to see some really beautiful landscapes. 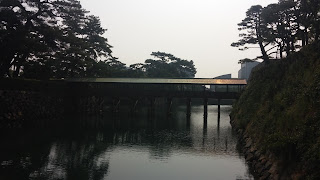 Covered bridge outside of Takamatsu-chikko station.

It was while waiting for a train that I had my favorite interaction yet. A young girl approached me at the Kokobunji  station yesterday when I was on my way to Marugame, which surprised me because mostly locals just give me my space. She was wearing very Western clothes (most do but these were especially Western in style--purposely stressed and torn jeans, big light brown contacts, Taylor Swift style t-shirt/sweater). She had a pokemon fan and a mole on the bridge of her nose right between her eyes that was just darling. I looked up at her and she said "hello" very enthusiastically. We began to talk--her English was developed enough to have a very basic conversation and my Japanese, of course, is worthless. We exchanged ages--she was 17, a high school student, going to see a friend and obviously thrilled to be speaking in English to a foreigner, and I of course am 26, a teacher, and obviously thrilled to be speaking in English to someone who wants to speak to a foreigner. We both remarked on how hot it was and she taught me the Japanese word for breeze--Kaze--by rolling her finger in a loopty loop in front of her. We rode the train together and she pointed out the direction of her house, her grandmother's house, and a ramen shop. She told me all the station names as we passed as well. She also said she liked Arianna Grande and Taylor Swift when I asked what music she liked. (We  got some looks on the train, but I think maybe I was speaking too loud. Thats a thing here, and its a involuntary tick  I have when trying to be understood.)  Then she told me to switch trains at Saikaide station, where she was disembarking. There are a couple of types of trains going in the same direction, I'd been told before, and I was on a slower one. I decided to do as she said and she told me what time my train would come. When the time came a strange type of train I'd yet to see--single car and packed to the brim with a destination name I did not know--pulled up. For a moment I was worried I had been kinda tricked--I mean, heck, it'd be a pretty funny and easy prank to pull on a foreigner, but I asked the conductor and it was all good, evidently.
The train, though, was packed, and that's the first time I'd been on one like that. Lots of bumping shoulders, and I think in the end it just saved me maybe ten minutes.  Still, she was so excited to give directions I couldn't turn them down.
Other than that, I've gotten some good news on the publication front this week! I had a poem published in Gravel the day after I got here, and I've gotten word that my story "Animal Heart" will be in the upcoming anthology put out by For Books Sake, centered on Fairy Tales where young girls are being not such the damsel in distress, but the damsel empowered. (Huzzah.) On top of that things are moving forward with my upcoming publication in Weird City. So far, though, I haven't written much new while being here. Jotted down a quick not so great poem and started a bit of a short story but I'm not sure where its going.
I'm going to try to come up with a schedule for updating the blog soon. Till then, over and out folks. I gotta go teach some kids (ALL ALONE! OH MY GOSH!)