This week started off with Summer Tour, a Gem School event where we spent Monday and Tuesday with the kids. It  was Fairy Tale themed which was pretty much right up my alley, but since I just got here I didn't have to do so much. Apparently they've been planning this since at least February. But it was a good chance for me to get to know my coworkers and a good portion of students.

After that we were given the rest of the week off for Obon. Obon is a Japanese Buddhist-Confucian holiday dedicated to honoring ancestors.  Obon is short for Ullambana, It originates from the story of Maudgalyāyana, a disciple of Buddah who was eventually stoned to death due to the karma he accumulated in a past life when he killed his own parents. During this lifetime, however, he used his supernatural powers to look into the land of the dead and saw that his mother had somehow ended up in the Realm of Hungry Ghosts. Buddah told him to make offerings to the monks who had returned from their summer retreat. After he did so he saw his mother's release from suffering, and understood all of her past selflessness and kindness.  He was so overcome with joy and gratitude  he danced the Bon Odori, or Bon Dance.  Now each area has a different time in which they celebrate Obon, since none of them adjusted to the Gregorian Calendar in exactly the same way. In the story it occurs on the 15th day of the seventh month and lasts three days, the final day being celebrated with paper lanterns being floated down the river to symbolize the return of the spirits to the afterlife (where as the dance is meant to invite spirits). Each region as well has their own version of the dance and music to go along with it.

On the first day of Obon, I was invited by another Marugame girl named Kristen to go to Tokushima, which is famous for its particular take on Bon Odori, the Awa Odori, Awa being the name the old feudal administration used for the area.  It's the largest dance festival in all of Japan, attracting over 1 million tourists each year. There are theories on where and when this particular celebration of revelers dancing through the streets began--a popular one being that it was founded in 1586 in celebration of the opening of Tokushima castle, where people drank so much they began to dance through the streets and some picked up instruments, and the lyrics were made up on the spot, but this story lacks any actual proof. Hard evidence does suggest that it was established by the 17th century. The song associated with Awa Dori is a popular, local version of a song from the Edo period, Yoshikono Bushi, called Awa Yoshikono. The lyrics go something like this:


Being at Awa Dori was pretty amazing. The streets were packed full of people, as well as vendors. When the dancing got started after they moved through their course, you could find several stationary troops on pretty much every street putting on a show.  When one ended another would begin just a few feet away, and sometimes there would be two going on right next to each other. 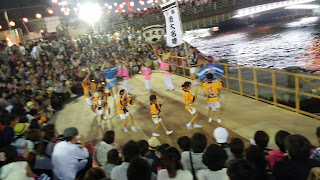 Some of the dance troops would even pulled us in and had us dance in the circle along with them.  They were even dancing through the shotengai. There were also a lot of food and game stalls, and I tried yakitori--which is just meat on a stick from what I gather, and takoyaki, which is fried squid balls. Both were pretty okay.
My coworker and I also played the game where you scoop turtles into a bowl with a paper net to see how many you can get until it breaks. Most commonly its done with goldfish. We both won a turtle. I have to admit, I do not know what kind of turtle it is, so if you do, please tell me. That'd be helpful. 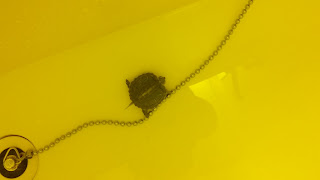 Morla the mystery turtle chilling in my bath while I clean zir tank.

The next day me and a few coworkers headed out to Takamatsu to see the fireworks. This festival was a little smaller, but the location was beautiful. They were shooting the fireworks off of a boat on the sea, and people were lined up along the dock and in the fields to watch. We got a spot with Kristen and a handful of other foreigners to watch it, and I got to meet some other American and Canadian folk who are in the area. The fireworks were really spectacular--they went on for an hour--even though it rained on and off through out, sometimes quite hard. 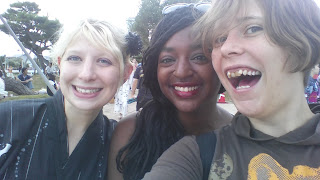 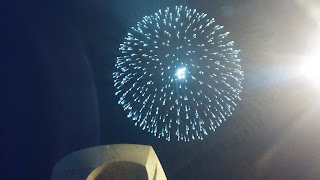 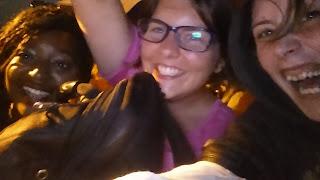 When we left the trainstation was packed full of people. We ended up squeezing in next to this old kinda drunk guy who was playing music on his phone. After I bobbed my head to it once he kept putting it up to our ears and grinning, and then pointing to a picture of the artist and saying "Kawaii." Playing music out loud on the train is apparently kinda rude, and it was probs one of my stranger interactions, but it was also kinda funny. Especially cause he didn't seem at all dangerous, just a little goofy.

Obon technically isn't over yet, but for the rest of the festival I'll be taking it a little easier. I intend to grab sushi with a coworker today, and then maybe just veg out for the rest of the afternoon. I'm also currently working on a short story, so that's probably something I should get back to.

Hope all is well in the States.