Friday I taught my first classes alone. They went well. I teach a range of ages from babies to adults. The kids are pretty fun to teach. It’s the first time in my teaching career that I’m encouraged, neigh, even REQUIRED to tickle my students. At first I felt a little strange about it, but after a little bit it came pretty naturally. The kids warm up pretty easily and they find the simplest things funny. The toughest student I seem to have at the moment is a teenager who is very much a teenager.
Saturday I took a bike ride to McDonalds which is basically the same as it is in the States but more fancy and popular which made me laugh. And then I went to a local Super Center to find some clothes I need for an event my school is hosting Monday and Tuesday. Supposed to be an enrollment drive I think, plus one for the current students called Summer Tour. Its fairy tale themed which is right up my alley. We’re going to be staying with the kids for a whole night. While there I saw a whole bunch of entertaining shirts with strange English phrases on them. Like “Peace and Relax” and so on. I intend to stock up on those most def.

Today my coworker Leslie and I took the train in to Takamatsu. There’s a language club there for Japanese speakers and English speakers on Sundays, and a giant shopping arcade that is supposedly the longest in all of Japan. They’re like malls, but outdoors, called Shotengai. The walkways are covered by a glass roof typically. They’re pretty popular in Japan, and there’s one in Marugame as well, but it’s not nearly as large or busy. (Marugame, I believe I mentioned, is like Youngstown in the way that it’s kind of a shrinking city, but to me it still seems rather large and really beautiful. Plus, that kinda makes it feel more like home.) Wandering through the Shotengai at night is actually a lot of fun. A lot of the shops are closed then, although there are some bars in Marugame's.  It feels surreal, like being in a mall at night when you aren't supposed to be. Very Dawn of the Deadish. 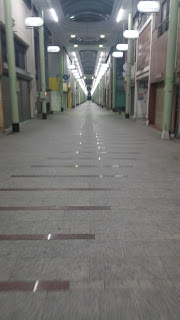 We stopped at the International Language Exchange where the club is, but sadly it isn’t happening on Sunday’s this month. It’ll start again next month, along with Japanese lessons in October. So we headed down to the Shotengai. We spent a lot of time there, wandering around the stores. The one in Takamatsu is three stories high. There were even a couple American/European stores like Gap and Gucci. When I have some money to burn I’ll probs head down that way cause there’s some adorable and strange stores there.

Leslie has been teaching and living in other countries for a while. She went to Korea first, then spent some time in Australia. She gave me some tips on what social media sites I should join to try and find some international pals, and we both discussed taking a weekend trip to Tokyo, since round trip flights are about 100 bucks where we’re at.

After a couple of hours we headed back home, and I took a walk around a small local park. I’ve looked it up and there are some fancy gardens in the area I intend to check out. Plus an art gallery. After Summer Tour there’s a holiday coming up—Obon—which should be really interesting and give me even more time to explore. 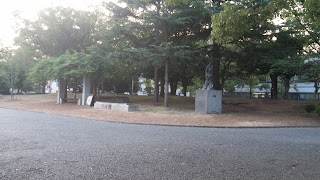